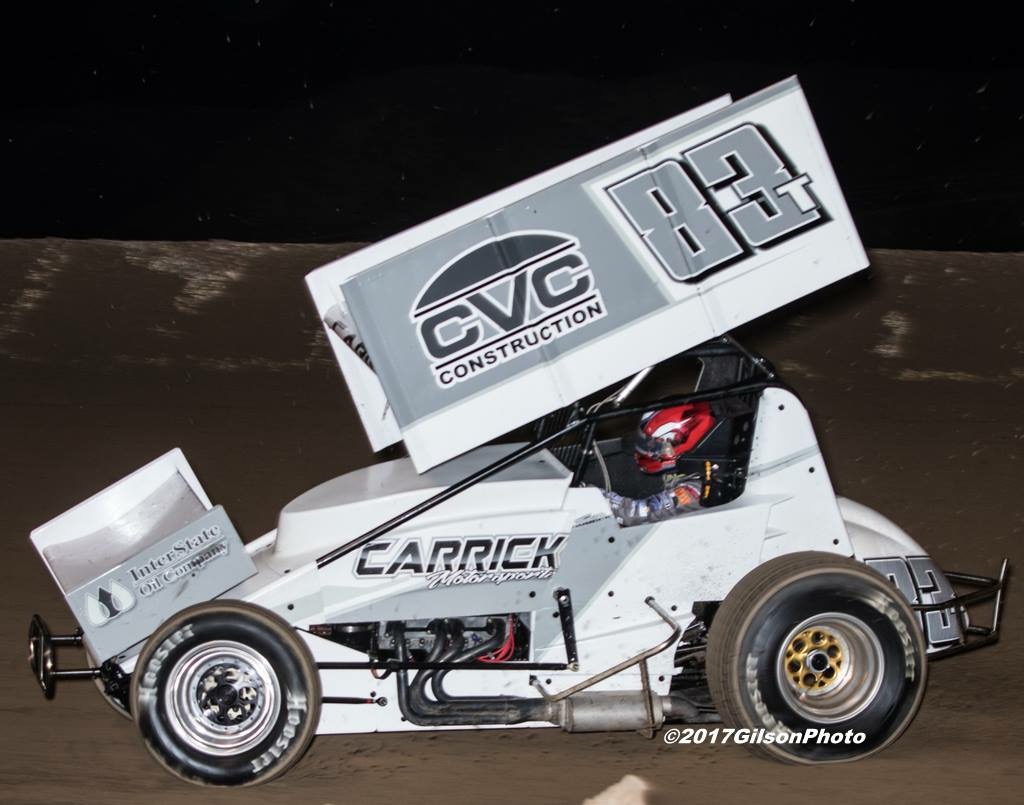 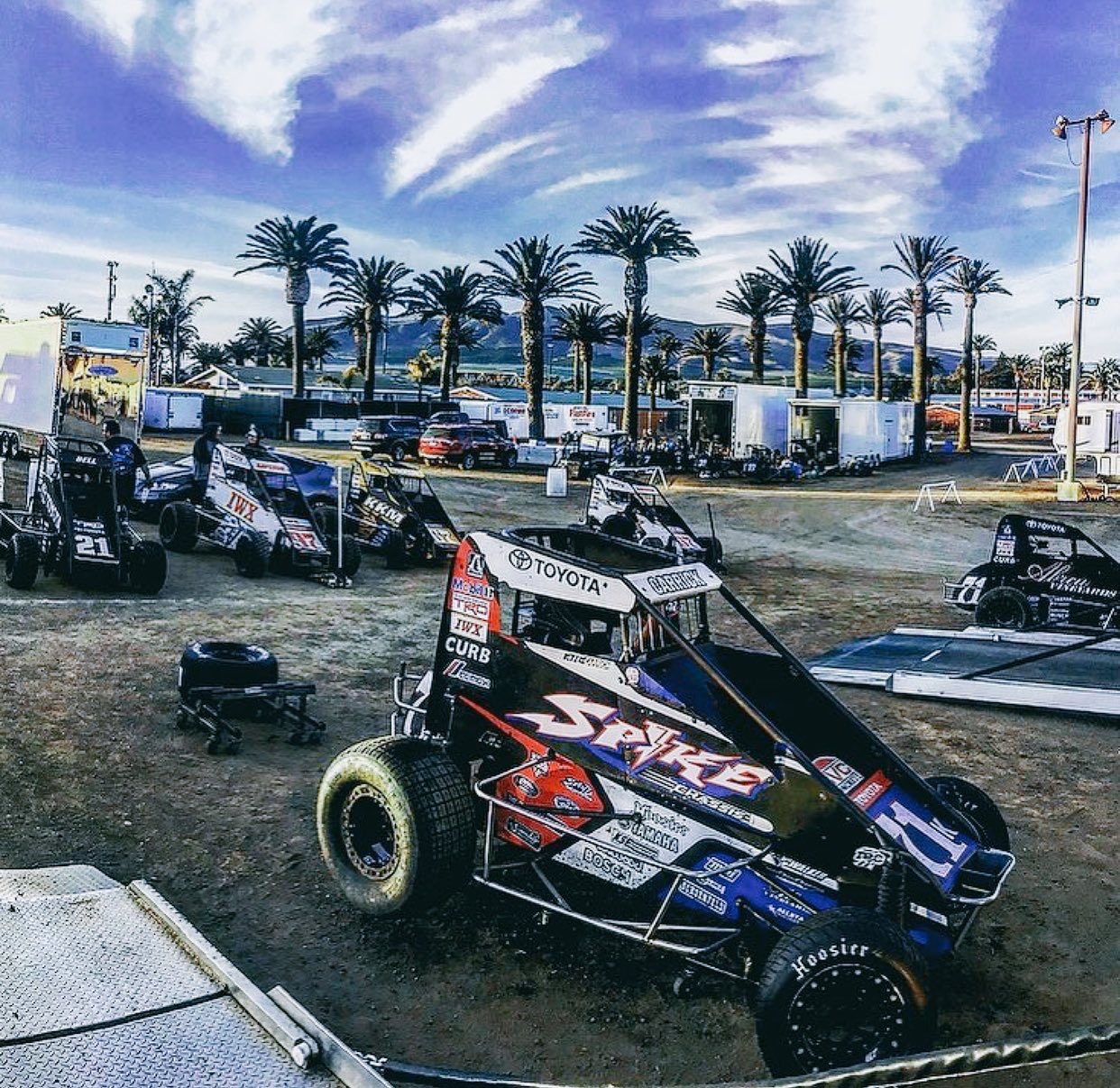 Tanner Carrick spent his Thanksgiving holiday getting a ton of racing action in. Carrick would show his versatility as he closed his Rookie of the Year campaign with the USAC National Midget Series during the annual Turkey Night Grand Prix, and also competed in two non-wing races, as well as two ASCS Southwest winged 360 events.

“It was a really fun weekend of racing,” Tanner Carrick said. “I was fortunate to get a lot of racing in, and I have to thank my Keith Kunz Motorsports team, as well as my Tanner Carrick Racing team for their hard work over the four days.”

Carrick’s busy weekend kicked off on Wednesday night at Ventura Raceway. Testing the midget, Carrick would also be in action with the VRA/USAC West Coast 360’s for the first of two nights of racing.

Timing the CVC/Cemex/Interstate Oil backed No. 83T machine in 12th quickest in his time trial flight, the Lincoln, CA wheel man would handle business in his heat race as a second place finish would propel him into the 20-lap feature event.

Lining up in the inside of the eighth row, passing would prove to be at a premium as the bottom would be the preferred line for most. Hitting his marks in the fast paced feature event, Carrick would hold his own as he took home a 17th place finish to open the Turkey Night Grand Prix.

Back in action on Thanksgiving in both the sprint car and the midget, Carrick would line up third in his ‘B’ Main based on his Wednesday night showing with just the Top-Four finishers moving into the feature event. Battling with the likes of Geoff Ensign and Brody Roa, Carrick would flex his muscles and move into the feature event where he would race his way to another 17th place finish in the ‘A’.

In Midget action, Carrick would get off to a tough start as a slight mistake in qualifying time trials would see him time the TRD/Curb Records/IPC backed No. 71K entry in 35th quickest.

Finishing 11th in his qualifier, Carrick would finish 10th in the Last Chance Showdown and would opt to take a provisional into the 98-lap Turkey Night Grand Prix feature event.

With the track a bit more racy after the 30-lap Sprint Car affair, Carrick would look to make a big run after taking the green flag from the 27th starting position.

From the back of the pack, the 2017 USAC National Midget Series Rookie of the Year would turn some heads as he searched for open real estate on the tight confines of Ventura Raceway. Getting stronger as the race scurried along, Carrick would take the checkered flag in the final points race of 2017 with a hard fought 11th place finish.

With non wing sprint car action and midget action in the rear view mirror, Carrick and his TCR team loaded up and made the trip to Queens Creek, AZ to take part in the 2nd Annual Copper Classic at Arizona Speedway with the ASCS Southwest tour.

Friday night saw Carrick time the Interstate Oil/Conti, Harris, and Sloan/Emerald backed entry in 18th quickest in time trials before he would be involved in a heat race incident that forced him into the ‘B’ Main.

Gridding the field from the 10th starting position in the semi, Carrick had his elbows up on the slick racing surface as he was able to pick off cars at will as he carved his way to the front. Racing up to the fourth spot at the finish line, Carrick would transfer to the feature event where he would line up in the 20th starting position.

From his 10th row starting position, Carrick would continue to charge his way forward at the foreign facility as he worked his way towards the Top-10. Racing with Reece and Chose Goetz in the final laps, Carrick would take the checkered flag in 12th.

Saturday night would bring on the final night of a busy four night stretch of racing for Carrick and his team.

Getting the night started off well, Carrick would time in 10th quickest in qualifying time trials before racing his way to a win in heat race action and transferring directly into the feature event.

Gridding the field from the eighth starting spot in the 25-lap feature event, Carrick would battle inside the Top-10 during a rapid fire 21-laps that clicked off with no stoppages. On the slick surface, Carrick would put his right-rear up on the cushion as he again battled with the Goetz brothers, as well as fellow California youngster, Gio Scelzi.

A couple of late cautions would change the complexion of the race slightly but Carrick would still end his weekend with a great showing as he took the checkered flag in the eighth spot.

“It was really good to get a lot of laps in three different kinds of cars at two different tracks,” Carrick added. “It was great to run with both the KKM guys and the TCR guys, and again, really have to thank everyone that makes this all possible.”

Tanner Carrick Racing would like to thank CVC, Cemex, Interstate Oil, Conti, Harris and Sloan, Emerald, and Timberworks Construction for their support.

ON TAP: Carrick will continue to race through the winter months as he is now slated to head to Red Bluff, CA this Saturday night and compete in a 500cc Outlaw Kart.